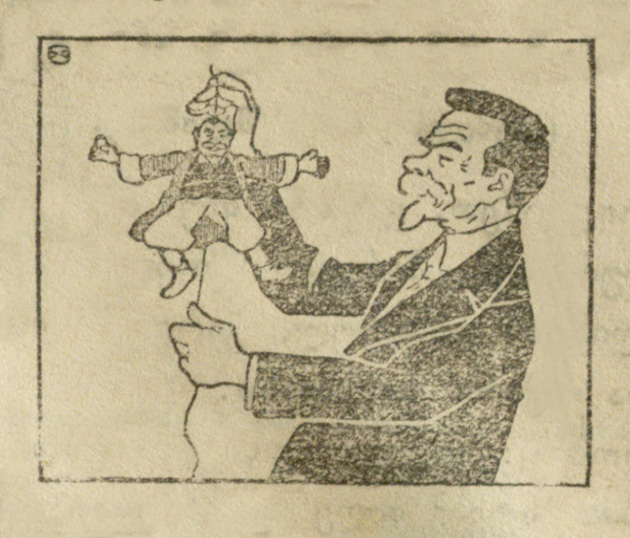 In 1916, Devil's Whip published an entire issue (№ 37) as a tribute to Oskar Schmerling. In response to the journal's request, Schmerling wrote this ironic autobiography detailing his career in caricatures. It is translated here into English for the first time by Sophie Barrett.

By the unfortunate fate of my favorite part of the world, I was born on July 1, 1863 with a pencil in one hand and a whip in the other. Upon seeing the light of this world and a midwife for the first time, I was not able to deny myself the pleasure of expressing my thoughts with a caricature, which is still a secret to humanity.

A pencil and a whip became my best friends and assistants in “serving” my beloved homeland.

I studied at Tbilisi Real School and for my own sake - my academic record was not great.  How can one be fascinated with mathematics with a pencil in one hand and a whip in the other? And since everything in this school, be it a language or a choir class, was based on mathematics, I was hardly able to reach the sixth grade. My friends from that period, if any of them are still alive, will have perfect memories of my outstanding academic record. When I was in the fifth grade (I dearly loved it and spent three consecutive years in this grade with no trouble at all), I decided to dedicate my free time to editorial and publishing work and started publishing the magazine Mosquito (კოღო). Due to reasons beyond my control, the magazine did not gain much popularity since it did not gain much love of my homeroom teacher and after its third issue it died a natural and tragic death. This remarkable event occurred in 1880-1881.

There was another magazine published in Tbilisi at that period, named Scorpion (ფალანგა), with Ivan Petroev as the editor-in-chief. I could not even pass by or go anywhere near the building casually. And one fine day (it surely must have been a beautiful day), I decided to stop secretly publishing my magazine, stop looking for other schools to study at, and decided to move to Scorpion's office with all my masterpieces.

It was said and done. The day marked the beginning of the torture for Scorpion's blessed publishers. My caricatures rained down on the publisher’s table like ripe fruit from a tree. As a rule, only a few were selected to be published; the rest were sent to rest in peace in an enormous, bottomless sack. Reviews about my work were mostly written to Scorpion. The letters included kind advice for me, for example: “M.Kh., first study yourself and then teach others,” “it would be nice if you could settle down and let our magazine be, too,” etc. I, of course, knew that the editors were not able to recognize my “talent,” could not understand the mystery of my “creations,” so I was not discouraged and saved my paintings for a brighter future.

Even though being an artist was not a popular idea back then, my parents agreed to send me to an art institute after my quiet success, tenacious insistence, and a sea of tears. I arrived in Petrograd on 1 August 1884 (please remember this date). The town welcomed me in low spirits as if it felt that a dangerous, detrimental individual was about to walk its streets. I was frozen, soaked, numb and chilled … oh that horrible climate!

I passed the entrance exam marvelously, but no one had even thought of arranging a celebration party for it. Imagine that I had not even heard a single word of welcome from anyone. I left caricatures behind while at the academy, and the whip fell into oblivion under a pillow, living a carefree life after a long endeavor at Scorpion.

My first painting, called Changing the Guard, was the last one to be presented at the exam. It was also crossed with chalk as a sign of utmost respect. We called this cross “George’s Cross”. However, no one was ever happy to see it. My trained skills, meticulously refined through bitter experience at Scorpion, were politely avoiding the humorous magazines of Petrograd and did not grant the pleasure of intimacy to any of them. It was only in 1887 that I called on these publishing houses. I feel happy with the devils, proof of our current cooperation and that it all started in those good old days. I started cooperating with the German caricature magazine, Pipifax (Nonsense) – the name standing for a joyful little devil, a citizen of hell. The mail room of this magazine did not bother me much.  Out of the Russian language magazines, only a supplement of Son of the Fatherland (Сын отечества) and The Jester (Шут) were lucky enough to have me.

An abundance of poison and sadness (which grew ten times while being in close proximity with and relentlessly working for satire) caused exhaustion in me and following doctors’ advice (they’re good at that) I had no other option but to leave Petrograd and move south. I settled in the village Khan Kendi, in my father’s house, near the town of Shusha. While there, life offered me two options: go to hell with my beloved devils or look for shelter with Dr. Orbeliani.

Both options were enticing and desirable, however, I was not too thrilled with the idea of a peaceful life and so I decided to stay on my troublesome path. With this intent, I decided to dedicate myself to theater. I gathered a group of actors, joined them myself, and started passionately working in one of the old barracks of Khan Kendi’s garrison. Please, note as post scriptum, sadness and sorrow paved the path to Orbeliani for me in the first case. This time it was likeness to what I had created myself – actors, stage.  I have to be honest, I have not seen a more ill-tempered group of people than actors, however we did work together for a year and eventually, at the end of that year, I ended up in Munich instead of Petrograd.

My “personal development” in Munich included not only art but drinking special Bavarian beer as well. This exercise played a part in my plan of being in a physical shape suitable for a somewhat respectable artist - to have the desired object of my quiet longing –a beer belly, at least a little one. I planned to return home with a respectable appearance, but all was in vain. I came back from Munich just as thin as the Caucasus sent me there. Every time there was a positive impact on the fullness of my body, German “wassersuppe” would take the good addition right back from me. If gaining weight is an object of your desire, drink German beer and never go anywhere near “wassersuppe.”

I went to every single magazine’s doorstep in Munich with my caricatures, but Munich is very different from Petrograd – at that time when I was there, you could count up to 5,000 artists alone (makes you wonder about the fate of humanity), a number bigger than the population of a town. However, imagine that there was a publishing house destined for me in Munich as well. I started working for a special magazine called Radfar Humor (Cyclists’ Humor). I (having had never put my foot on a bicycle pedal) was reluctant to start living a sportsman’s life, however soon I realized - in order to do my job, I did not have to ride a bicycle; sitting on a chair was fully sufficient for performing my tasks.

I paid my dues to Berlin and my self-development as an artist in 1892 and headed back to the Caucasus with the intention to become a valuable, or not so much, member of the society.

My pencil had been waiting for an arena to shine for a long time. My whip, covered with dust, was peacefully resting on a table with no signs of life. However, 9 years later, A.M. Jabadar had the genius idea to lay the foundations for Georgian caricature. I sharpened my pencil, dusted my whip, and I have been serving the Georgian humorous press for 15 years now. Sometimes, a good example provides a reason for followers to appear – Armenians and Muslims followed the example set by Georgians. There were many attempts, especially in 1905-1906. There were several magazines published, however some of them were not considered “trustworthy”, some just did not have a rich uncle in America and so they died with an untimely, tragic death. Despite this, I still hope that Armenian and Turkish humor will rise again from this unfruitful soil, but until then, allow me to raise this horn and tell Georgia loudly: